Snacks are not, inherently, a bad thing. In fact, snacks can be a very good thing. But you have to know the rules of smart snacking.

As Kim Yawitz, R.D., a gym owner in St. Louis, cautions, the first thing to consider when deciding on a snack is whether you’re actually hungry.

“Boredom, stress, and proximity to snack foods can trick your brain into thinking you need a snack in the absence of true hunger,” Yawitz says. “Physical hunger sets in gradually a few hours after your last meal and can be satisfied by any food, while snack cravings come on quickly and are usually specific to one food—say, cookies.”

Assuming you’re truly hungry, Yawitz says that your best option is a snack that includes protein and fiber with little to no added sugar. “This snack combo will fill your belly until your next meal while also minimizing blood sugar fluctuations, which can leave you feeling snacky,” she says.

Yes, calories are important to consider, but the snack’s nutrients matter, too.

“Snack calories are important if you’re watching your weight, but snack quality also counts. Ultra-processed and sugary snacks can lead to food cravings later in the day, making it more difficult to hit your daily calorie goals,” says Yawitz.

Ahead, Yawitz shares seven favorite high-protein, high-fiber snacks that get her stamp of approval. 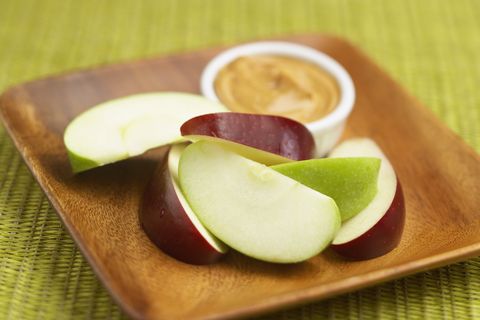 “A medium apple with 2 tablespoons of almond butter has a whopping 8 grams of belly-filling fiber, plus 7 grams of plant protein,” she says. 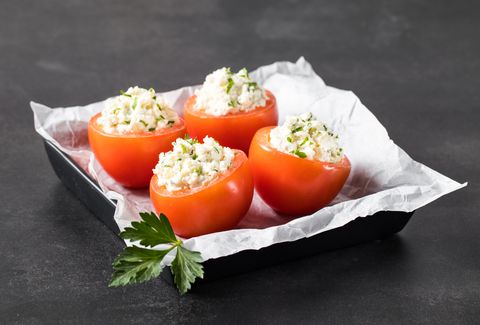 Yawitz notes that cottage cheese contains casein, which is “a slow-digesting dairy protein that promotes fullness.” She says she loves to mix the nutrient-dense dairy product with a bit of low-sodium taco seasoning for flavor and top it with some cherry tomatoes to up the fiber quotient. (If you’re in the mood for something sweet, scoop out a cantaloupe and put cottage cheese in there, perhaps with some Grape Nuts cereal as a satiating topping.) 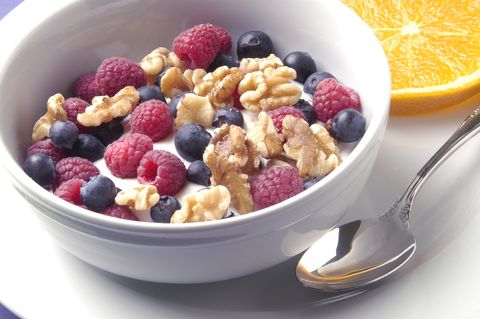 “Ratio Protein Yogurt tastes like pie filling and has 25 grams of protein per serving,” says Yawitz, who suggests topping it with one tablespoon of crushed walnuts and one cup of blueberries. 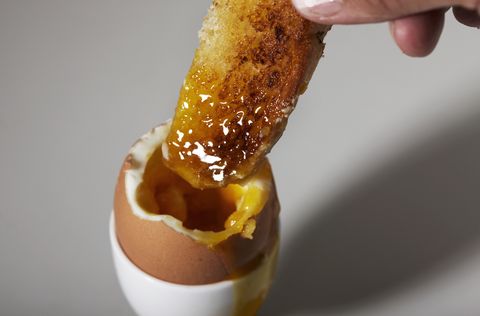 “Eggs are a great source of vitamins and minerals like choline, which helps lower LDL—or ‘bad’—cholesterol,” says Yawitz. “I like them hard-boiled on toast after a mid-morning workout.”

“Whey protein powder is a convenient on-the-go snack that’s much healthier than most gas station options,” says Yawitz. “Keep a scoop in a shaker bottle in your car, and grab a banana or your fruit of choice on your way out the door to add balance to your snack.” (If you’re plant-based, try one of these muscle-building vegan protein powders.) 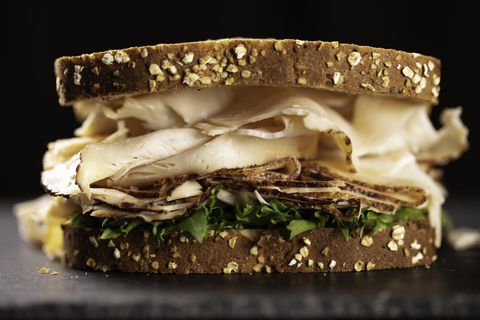 “Turkey breast is a lean protein that keeps you full without adding a bunch of calories from fat. Throw some on a slice of bread for a quick and easy snack-wich,” says Yawitz. For some extra fiber, feel free to add avocado, lettuce, and/or tomato. 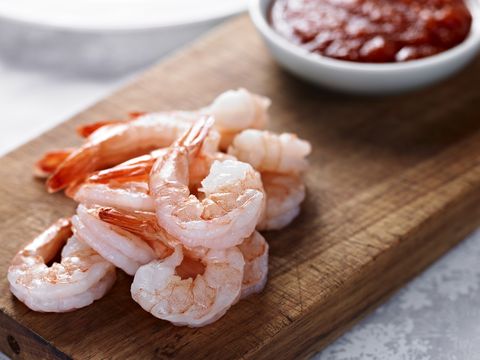 “Shrimp cocktail is a refreshing, high-protein snack,” says Yawitz. “Add one cup of veggies for some fiber (and crunch!) but take it easy on the cocktail sauce, which can be high in sugar.”

Perri is a New York City-born-and-based writer; she holds a bachelor’s in psychology from Columbia University and is also a culinary school graduate of the plant-based Natural Gourmet Institute, which is now the Natural Gourmet Center at Institute Of Culinary Education. Her work has appeared in the New York Post, Men’s Journal, Rolling Stone, Oprah Daily, Insider.com, Architectural Digest, Southern Living, and more. She’s probably seen Dave Matthews Band in your hometown, and she’ll never turn down a bloody mary. Learn more at VeganWhenSober.com.