Home Trending News OPINION | GARY SMITH: What's that? The start of school? Why is there a line of traffic at that building? – NWAOnline

A tale of two households:

Household with children: “It’s the first day of school. Yeah! Let’s at least fake some enthusiasm! This is going to be a super great fun year and we’re going to start it off the right way with a nutritious breakfast of healthy, fiber-rich granola cereal that tastes … like Death. OK, leftover pizza and Pop-Tarts it is, but tomorrow … natural yogurt and persimmons.

“Need to check those backpacks and make sure we’ve got everything. Hand sanitizer, masks, aerosol disinfectant, hazmat suit, Kevlar plates, tissues, more hand sanitizer — no more drinking it on a dare! — iodine pills, first aid kit, weird silver warming blankets and inflatable life preserver in case of flooding. All there. Pencils? Do you all even need pencils anymore? Well, we’ll get them later. If they actually make it in on the ship from China.

“Can Fluffy go to school? No, honey, he’s a dog and dogs only get to go on airplanes and in restaurants and stores and things like that, unless we fill out a bunch of forms that mean you never get to work in the defense industry. Yes, I know, he’s such a smart dog because he eats all your broccoli and he knows French because he understands that French word Daddy says to him when he chews the sofa cushions. You know that’s not really a French word, right? Because someday you might actually take French and I really don’t want to go to the principal’s office one more time.

“Why isn’t Daddy taking you? Well, honey, the school still has him on ‘Drop-off Probation’ after he lost his patience in the car line last year, cut across the grass, told you all he was just going to slow down and you should hit and roll and that your brother shouldn’t complain about only having one tennis shoe on because kids in Asia go to school barefoot.

“And remember, if he stays out of trouble, he’ll get to go to your combination school dance/recital/recorder concert. He really wants to. He’s still so upset that last year he had to go to the driving range with his friends and miss the macaroni art project exhibition after he got in trouble because he didn’t know there were any drinks without caffeine in them when he took you kids to the drive-thru coffee shop before school, then told the teacher handling drop-off, who noticed the cups, that ‘for the next few hours, that sounds like a ‘You problem.’ Yeah, Daddy. He’s so funny.

“Did your brother get his bassoon? No, honey, I don’t really know what a bassoon is. I think it’s a musical instrument that makes a sound like a cat falling into heavy machinery and is so cumbersome we have to strap it to the hood of the car. I do know it’s not a French bassoon. That’s more of Daddy using that word that’s really not French.

“You’re tired? Now why would you all be tired? We’ve been working on getting you guys to bed at a decent hour in advance of the start of school for months. OK, weeks. OK, last week. OK, we didn’t let you stay up ’til 2 in the morning watching “Stranger Things” last night. I mean, it was 11 at the latest. So, yeah, you’re tired. Welcome to life.

“Now let’s all hurry hurry into the car because if we don’t get in the drop-off line first we may not be in the same time zone as the school. And despite my advanced degree in molecular biology, my primary functions appear to be driving Kiddie Uber and being the only person at work who can show my boss for the 300th time how not to mute himself on Zoom. It always amazes him.

“And I’ll be waiting for you in the car line when school is out. I’ll bring snacks. And a sleeping bag, since the line is sort of long and I won’t be more than a mile or two away. I’ll shoot up a flare periodically. So let’s all go have a super, super day and remember: There are only about 2,000 more just like it before you all graduate!”

Household about three years after all the children have graduated: “Wow, there’s a lot of traffic this morning. I wonder what that’s all about? They must have shut down another street for six months while someone installed a garden gnome in their yard. Wait, when does school start? Sometime in September, right?”

— Gary Smith is a recovering journalist living in Rogers. 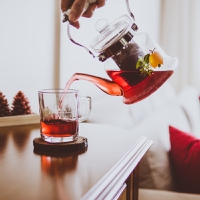